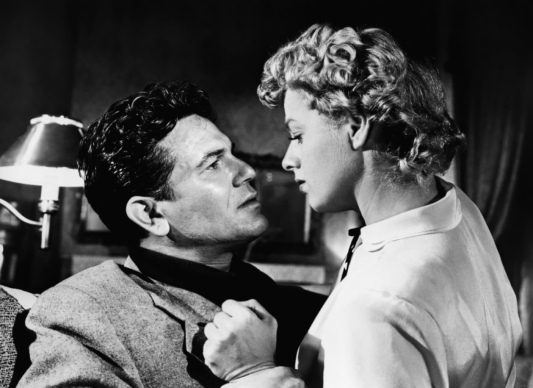 My first viewing of He Ran All The Way was at this year’s TCM Classic Film Festival. What follows is an extract of my original post:

He Ran All The Way was hardly a second choice and did not disappoint. A gritty, menacing Noir, we were soon being terrorised by a crooked John Garfield brandishing a gun, then a large piece of poultry, into the faces of Shelley Winter’s terrified family. Furthermore, I was in awe of Galdys George’s wardrobe and her superb, very minor, role as Garfield’s mother who smoked, drank and bitched her way through barely two scenes.

The sense of bleakness within He Ran All the Way is also palpable off screen. The Blacklist haunts the film – its screenplay was co-written by Dalton Trumbo and Garfield was blacklisted two months before the film’s release. It was also to be Garfield final film – he died one year later. Denis Berry, whose father John Berry (who was blacklisted after Edward Dmytruk named him as one of the Hollywood ten) directed the film, gave an affecting, personal introduction of life during this era. We can read about the time and see movies written, during and about this historical Hollywood period, but it is only when you hear it directly from someone who experienced and lived through it all that the reality truly hits home.