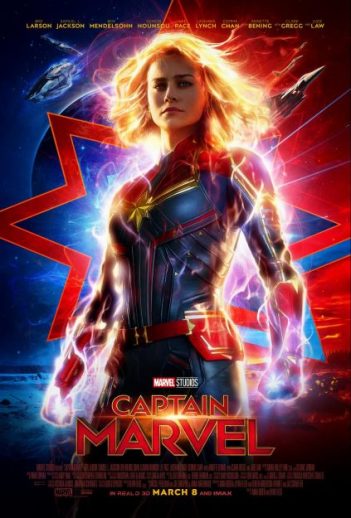 It has taken twenty-one films and eleven years, but we finally have a woman headlining a movie in the Marvel Cinematic Universe. Ever since Carol Danvers’ Captain Marvel insignia flashed up on Nick Fury’s pager in the closing seconds of Avengers: Infinity War, we knew we were in for a treat. And she has not arrived quietly.

If you follow me on Twitter and/or are friends, you will know how excited I have been for the release of Captain Marvel. But not everyone has shared my enthusiasm.  Brie Larson kicking ass and looking awesome in the movie’s trailer was met with ridiculous criticisms from men. I read everything from “her voice is too soft” to “why is she so moody?” Most recently, Larson’s calls for more media diversity during her press tour were met with trolling, abuse, and a bewildering determination for this movie to fail before general release. However, all of these aspects have fed into the film’s message, because, essentially, Captain Marvel is about a woman facing the man (or Larson facing the men on the internet) and declaring “I have nothing to prove to you.” And Captain Marvel explores this beautifully.

For six years, “Vers” has been living on Hala as a member of the elite Starforce, defenders of the Kree civilization against their Skrull enemies. Her memory is sketchy; she glimpses her past life as a pilot, and her traumatic childhood, knowing that these are the keys to something more. Trained by Yon-Rogg (Jude Law) to control her emotions and photon-blasting hands, he uses her strength as a weapon against her, insisting “control your emotions, emotions are weakness,” a mental shackle to suppress her full potential. In the real world, she would be deemed ‘uncontrollable,’ ‘difficult,’ ‘stubborn,’ and asked to ‘tone it down.’ Belittling powerful women appears to be universal.

The movie steps up in humour after Vers crash lands on C-53 (Earth) and meets a two-eyed Nick Fury. This intergalactic saga becomes a fun buddy comedy set in 1995, complete with grunge and pop soundtrack as more memories of her past life begin to take shape. Larson and Samuel L. Jackson have great chemistry, as do Fury and Goose, a ginger cat/Flerkin who, let’s be honest, steals the movie (I should write a post just on Goose, right?). I loved seeing pilot Carol and wanted more of that, just like I wanted to see more of Carol’s childhood on screen and more of her friendship with Maria Rambeau (the very underused Lashana Lynch). I am hopeful this will be explored and developed further down the line, especially now Carol has recovered her past.

The most powerful moment in the film occurs in the third act. Facing Yon-Rogg, who still addresses her as Vers, she finally shakes off his manipulation, casting off her given identity and telling him “my name is Carol.” It’s a victory for the women who feel they must make themselves smaller, not take up too much space, or are compelled to downplay their personality and abilities.

Directors Anna Boden and Ryan Fleck’s spin on Phase One era Marvel takes the MCU, albeit momentarily, away from the more overtly lavish movies of late, while the key message should not be taken for granted. Sure, it did not need to be verbalized quite so much, but its strength cannot be denied. I loved Captain Marvel, and can’t wait to rewatch. And I’ll very likely write more soon.

Additionally, it is very much having a Captain America: The First Avenger effect on me: the more I rewatch and reminisce about TFA the greater my affection grows, and Captain Marvel appears to be going in the same direction. There are striking similarities between both movies, and they both share similar characteristics.

In an interview with Polygon in 2018, comic book writer Kelly Sue DeConnick, whose groundbreaking 2012 ‘Captain Marvel’ comic book series was the primary source material for the movie, said something that stuck with me for months and, in hindsight, is perfect about the film:

We see this on screen: Carol throughout the years falling and picking herself back up again. Nothing can keep this woman down. I cannot wait to see what she will do in Avengers: Endgame next month (the thrilling mid-credits scene was A TREAT!!!). Carol Danvers is here to stay, and she is will only soar higher, further, faster, baby.