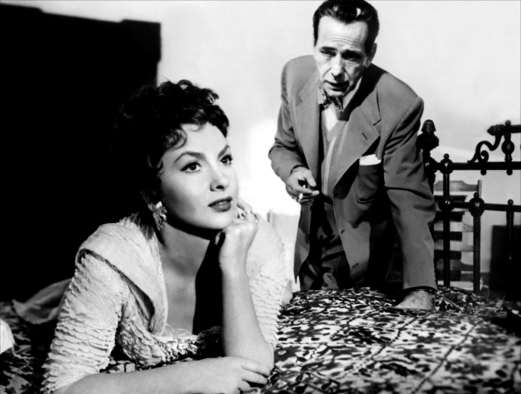 John Huston’s Beat the Devil is not easy to categorise. Part comedy, tongue-in-cheek, and rarely dramatic, Bogart described the film as “a sort of satire on the Maltese Falcon private detective,” while for John Huston it was “more a lark than a satirical story…It made no points about anything in particular, we just had a good time”. ‘We’ being the film’s star-studded cast including Humphrey Bogart, Gina Lollobrigida, Jennifer Jones and Peter Lorre.

While waiting in an Italian port to board a boat for Mombasa, a group of completely random people – two couples, a shifty-looking International trio and various other oddballs – connive to claim land rich in uranium. The plot is light, but the sartorial stakes are extremely high. It is impossible to deny that Lollobrigida oozes glamour as Maria (the wife of Bogart’s character), who never breaks a sweat and maintains effortless chic throughout the film. Whatever the situation she can be trusted to be seen in tight dresses, heels and perfectly un-smudged eyeliner. She also has some very funny moments, especially when she describes herself as an honorary Brit who maintains her subscription to Town & Country Magazine and has an afternoon tea ritual. She naturally falls for the English charms of Harry Chelm (played by the very British named Edward Underdone).

Although not quite as glamourous as Lollobrigida, Jones, in her oversized shirts and headscarves, adds to the continental allure. She raises a laugh when, in a cut-glass British accent, says she doesn’t trust the men because “not one of them looked at my legs”. Unfortunately for her, her hypochondriac husband constantly moans about “a chill on his liver”, has an unhealthy attachment to his hot water bottle, and (embodying the stereotypical Brit abroad) constantly moans about the unpalatable Italian food. You can understand why she falls for Bogart’s charms, dapperly dressed in a wonderful range of cravats and bow ties. Lorre too is rather chic as Julius O’Hara – “there are a lot of O’Haras in Chile” – who elegantly puffs away on a long white cigarette holder that matches his suit.

Convoluted, fast, funny and full of famous faces. There is little to not like about Beat The Devil. For serious noir watch The Maltese Falcon. If you like your noirs a little lighter, this can’t be beaten.

*This is a modified, slightly tidier version of a post that appeared on my old website (silverembers.com) on 6 October 2014. I don’t use that site anymore, so please continue to follow me here instead! Thank you.